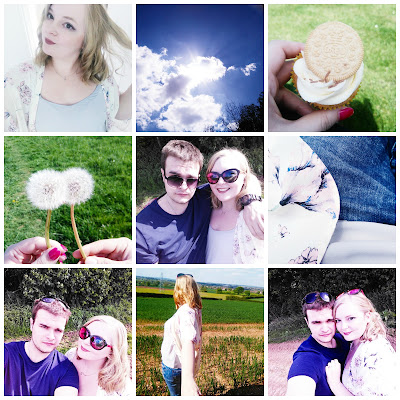 This weekend has been another fantastic one off with my fiance. We started Saturday off by getting up early and taking a wander around the town center where they had a food market on in the square. Which is where I got the really cute cupcake pictured above from. After that we decided to go and purchase some yummy fresh fruit, veg and chicken from a market stall and wandered back to the car. We then spent a few hours outside chilling in the garden with some drinks and a beautiful meal made by my fiance of sweet potato and grilled chicken. As it was such nice weather outside we went for a spontaneous walk up to the Castle and around the fields near it which is where we had a cute little photo session together.

In the evening on Saturday we were sitting around the house and my fiance’s parents invited us over for a barbecue and some drinks, so we took a trip over there to see them. I had such a nice time with his parents, having a laugh and a joke while tucking into delicious Polish sausage and various other goodies. I can safely say that I was such a light weight, I drank like 5 whiskey and cokes and was dancing around the living room with my partner and his parents. Their dancing is hilarious may I add! After we used up the majority of our energy dancing we sat down and looked through their family photos which was such a wonderful bonding experience, seeing them reminiscence on a personal level with me. A side to them both that I had never really seen before and I loved it. I will 110% be going over again soon for another night of drinking and dancing, but first I need to build up my alcohol tolerance level!

Finally, on Sunday after nursing a hangover and destroying my favourite breakfast when feeling the wrath of the night before – beans on toast. We decided to get up and dressed and go spend some time with my parents before they go away on holiday later this week. Me and my partner both received briefings on where things are around the house in case the youngest cat decides to be playful again and bring presents for us. We even took a selection of the photos over to my parents house that his parents had shown us the night before, luckily my parents were so busy focusing on getting things sorted for the holiday that they didn’t feel the need to get my photos out. I wouldn’t wish my tub headed photos on anyone!

20 Places I Want To Visit