My fiance and I are celebrating our one year anniversary this weekend, I can’t believe how fast time flies! We now have our own house together and are engaged to be married in the coming years. He’s not only my life partner and my lover he is also my best friend which is why we fit so well together. One minute its all kisses and cuddles and the next its play fighting and being silly together. I have no idea where I would be without him in my life. At this moment in time he is playing on his Xbox One, think its Wolfenstein he is playing, and I’m here with my headphones on dancing like a weirdo to some great music. 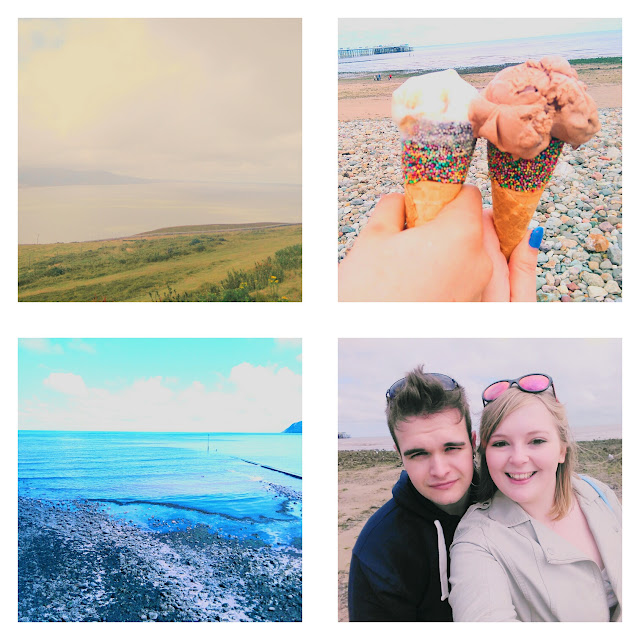 For our anniversary weekend we decided to take a trip to Llandudno, a personal favourite place of mine where he has never been before. We got up at like 6AM in the morning and were on the road by 7AM, taking the detour via Maccies to fill up on some delicious breakfast ready for the journey ahead. We arrived about 9:30AM and went for a drive up the Great Orme and took some pictures up there of the amazing views. its was so windy and chilly up there, and I decided to wear a short dress – well done Loren…Unfortunately the trams and cable cars weren’t in service at the time so had to drive back down and park in the town. We wandered around for a bit then had a drink and snacks in Cafe Nero and on our way down to the pier we bought some cool Ice Creams to munch on, I had Chocolate chip and Mike had Lemon and Toffee. We strolled along the beach and picked up some cool shells to bring back with us to display with the others in the jars on the bathroom windowsill. The seagulls took quite a fancy to the fact we had ice cream though, as one got considerably close to me, and lets just say that Mike told him where to go, both physically and verbally – no he didn’t do anything bad, just gave the seagull a bit of a shove mid flight which was hilarious. We wandered down the pier and played on the arcade games which were so fun!  We tried Guitar Hero but we tried it on the hard level which was a mistake as we were both rusty and sounded awful when we kept missing the notes but it was a great laugh!