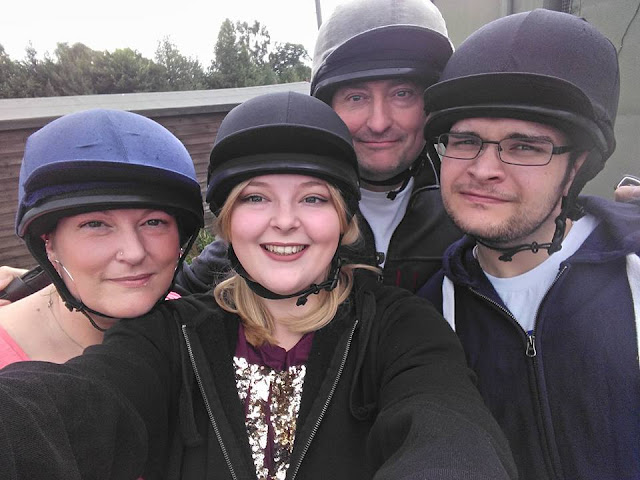 Over the weekend my parents, fiance and I went horse riding for the first time ever! My mum is a member of a meet up group on facebook for our home town and they had organized this trip. My mum then signed up, along with my dad and when I found out about it I asked if she could get me and my fiance in on it too!

We are all novices when it comes to horse riding, so made it an equal playing field when going out together. When the group gathered at the riding center I was picked first to jump on a horse, which is terrifying, especially being first and everyone watching you. The horse I was paired with was called Pirate and he was the owners ‘Johnny Depp’ as she called him. It was so nerve racking climbing onto the horse as when it moved you had to control it, mine just liked to wander around so I kept having to stop him. My partner was paired with a horse called Benson, my mum to a horse called Splash and my dad to a horse called Skye. You can see our horses here on the centers website.

When we were trekking, we all relaxed a lot more as we put all our trust into our horses. Directing the horse wasn’t too bad either as you just slightly pull on the reigns in the direction you want them to go in. The trainers there were so helpful as well, there was a young girl that stayed near the front with me and was showing me how to hold the reigns correctly and even went through the movements needed for trotting. And the lady at the front took good care of my mum who was so nervous to begin with and did not leave her side throughout the whole trek.

After the trainers could see that we were relaxing more they then encouraged us to try trotting if we wanted to, which was an experience in itself. I was quite calm during the first one, but when they did it later on without telling us it really scared me. As I felt like I was slipping from side to side on the saddle as I was unprepared. And to the trainers dislike I made a lot of screaming and noise making as it took me off guard, which in turn almost freaked the horses out too, which could of ended badly.

The trek we did was an hour around the forest, and it honestly didn’t feel that long at all. Although you could tell that the horses were feeling it as they were stopping for many toilet trips! The dismount was a lot more difficult than getting on, especially as we did not get the steps to use, we had to practically swing off the horse. I was one of the first to dismount, which meant I got to watch my mums slow motion graceful slide off the horse, where she landed on the grass, which gave us a giggle!

Overall horse riding was not a bad as I thought it was going to be, it was actually really enjoyable and I would definitely do it again!